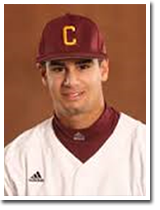 In his first season with the Michigan Bulls, Chris Mocerino will be head coaching our 15U team. Chris is a 2010 graduate of Clarkston High School where he was an All-County selection as a senior in one of the strongest classes to come through Oakland County.

Mocerino played his summer ball with Chief Pontiac American Legion where he set records for hits (64) and doubles (25) in 2009 and RBI (43) in 2011. After high school Chris played at Central Michigan University for Coach Steve Jaksa and most recently coached the 15U Michigan Red Sox in 2014.

Chris will also be instructing at the Bullpen Baseball Academy starting in the spring of 2015.