Valentine’s Day weekend marked the beginning of the 2014 Division I college baseball season. It’s a very exciting time of the year as players and coaches have been anxious to get started… and get out of this cold weather the northern teams are stuck with.

Here’s a quick look at some alumni action… Wake Forest senior Matt Conway is second on the team in hitting (.368) through 5 games, helping the Deacs to a 3-2 start. Last season Conway led Wake Forest in slugging percentage (.479), total bases (90) and doubles (18) in addition to his .335 average and 36 RBIs. 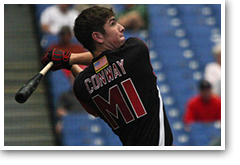 Matt also made 7 starts on the mound and was named to the John Olerud Two-Way Player of the Year Watch List. Coach Walter had this to say about Matt… “Along with Charlie Morgan, Matt is the other key to our season. When he is going well he is as good a hitter as there is in the league. He should be a double digit home run and 60+ RBI guy for us.” 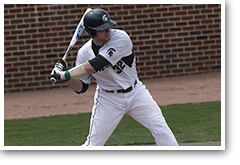 Although the CMU Chippewas couldn’t come away with a win at UNLV, Nick Regnier, Pat MacKenzie and Alex Borglin came out as the top three hitters. Nick added three RBI to his four hits and Logan Regnier grabbed the first stolen base of the season after hitting the team’s first double. At Western Michigan, senior Theo Piccirilli started all three games and led the Bronco’s in hitting. In 2013 Theo made 52 starts (primarily at second base) and was third on the team in hitting (.322), second in hits (68) and first in runs scored (31). Theo has continued to play on the 22U Bulls team throughout college.

Senior catcher Joel Fisher and the Michigan State Spartans got started with a 2-1 weekend against Wright State. Joel had a pair of doubles, led the team in slugging percentage and gunned down two of three runners attempting to steal. In 2013 he was named the team’s Danny Litwhiler Defensive Player of the Year after catching 37 games and throwing out 17 potential base stealers. Joel also added 5 home runs (2nd on team), 11 doubles (3rd on team) and 27 RBIs. His main focus this year is adding another Big Ten Championship to the one he got as a freshman.